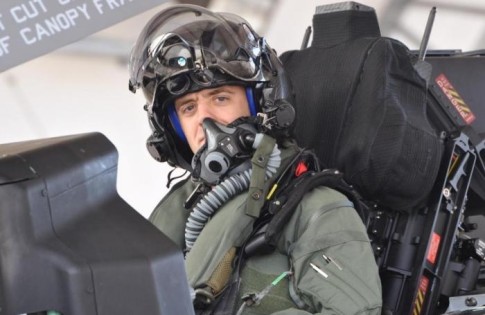 EGLIN AIR FORCE BASE, Fla., July 11, 2013 – Maj. Robert Miller became the 100th pilot to fly the Lockheed Martin F-35 Lightning II when he took to the skies above Eglin Air Force Base, Fla., for a training flight on July 9.

“It was great to get airborne today. The jet handles well and is very easy to fly. I’m looking forward to testing the combat capabilities of the F-35 over the next few years at Edwards,” said Miller.

Miller, currently assigned to the 31st Test and Evaluation Squadron at Edwards Air Force Base, Calif., has spent 11 years in the Air Force and has flown more than 1,300 hours in the F-16, including 369 combat hours. He joins an experienced cadre of F-35 pilots among the U.S. Air Force, Marine Corps, Navy, the United Kingdom and industry.

“Maj. Miller is representative of the highly-trained pilots populating the F-35 community,” said Col. Todd Canterbury, commander of Eglin’s 33d Fighter Wing. “This milestone is significant because it shows the program is maturing rapidly and highlights the successful implementation of a world-class training program and development of the F-35 Lightning II for the combat air forces. We are excited to have produced the 100th F-35 Lightning II pilot.”

The joint service partners at Eglin Air Force Base have flown 2,292 F-35 hours and have 28 aircraft assigned, representing the largest fleet of F-35s in the world. Approximately 100 pilots and 2,200 maintainers will be qualified annually through the Lockheed Martin F-35 Lightning II Training System at the base to support initial operational capability targets. The Lockheed Martin training system is also operational at Marine Corps Air Station Yuma, Ariz.

The F-35 Lightning II is a 5th generation fighter, combining advanced stealth with fighter speed and agility, fully fused sensor information, network-enabled operations and advanced sustainment. Three distinct variants of the F-35 will replace the A-10 and F-16 for the U.S. Air Force, the F/A-18 for the U.S. Navy, the F/A-18 and AV-8B Harrier for the U.S. Marine Corps, and a variety of fighters for at least 10 other countries.

Headquartered in Bethesda, Md., Lockheed Martin is a global security and aerospace company that employs about 118,000 people worldwide and is principally engaged in the research, design, development, manufacture, integration, and sustainment of advanced technology systems, products, and services. The Corporation’s net sales for 2012 were $47.2 billion.