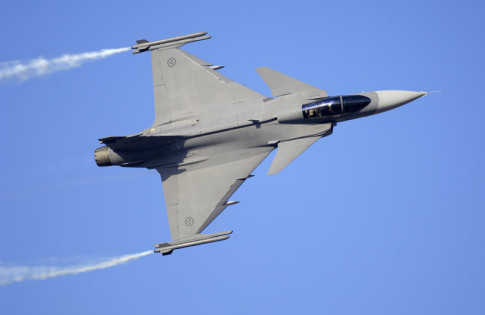 GENEVA — Switzerland’s purchase of 22 Swedish fighter jets hit a new snag Tuesday as the Swiss parliament suspended funding discussions, amid reports that EADS was trying to undercut the deal by offering used fighters at half-price.

The security policy commission of the lower house of the Swiss parliament overwhelmingly voted Tuesday to suspend discussions about how to raise the 3.1billion Swiss francs ($3.3 billion, 2.5 billion euros) needed to buy the JAS-39 Gripen combat jets. With 20 votes in favour and three opposed, the commission voted to suspend the discussions until its next session at the end of August to give it time to seek clarification from the defense ministry on elements of the contract, commission president Chantal Gallade told the ATS news agency.

The news came amid unconfirmed Swiss reports that the EADS consortium has offered to sell 22 used Eurofighters to Switzerland for just 1.5 billion Swiss francs. Switzerland announced last August that it had agreed to the highly controversial deal to replace its ageing Northrop F-5E/F Tiger fighters, with deliveries set to start in 2018.

The Swiss Gripen purchase, which is part of a larger order for the planes to be shared with Sweden in a bid to cut production costs, is controversial in Switzerland because it will require spending cuts in other areas. There are also concerns about what kind of guarantees the Swedish government can offer, since defense firm Saab is still developing the new Gripen jet series, and what kind of penalties will be imposed if either side fails to live up to their side of the deal.

The deal must receive a green light from the entire Swiss parliament and could possibly still be derailed by a popular referendum. It already hit a bump in the runway last month when the upper house of the Swiss parliament approved the purchase but refused to release the funds needed. And if the reports that EADS is trying to undercut the Gripen deal are correct, Swiss President and Defence Minister Ueli Maurer could see his main argument for pushing ahead with the Swedes — that their bid is the cheapest