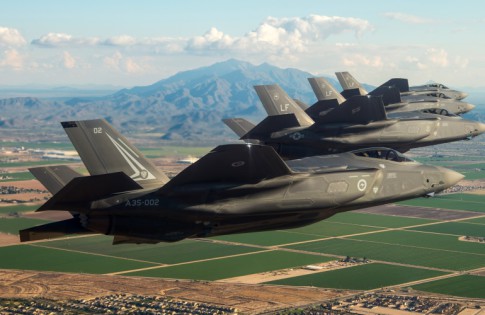 Nathan Phelps – July 24, 2015 – OSHKOSH — With a guttural roar, the newest fighter plane in the United States military’s inventory made its entrance at AirVenture 2015.

The visit by a pair of F-35 Lightning IIs, a stealthy multi-role fighter, is hailed as the first appearance at a public airshow by an aircraft that has been both lauded and questioned during its development. The U.S. Marine Corps is on the verge of using the aircraft operationally in the coming weeks.

The pair of U.S. Air Force F-35s from the 33rd Fighter Wing at Eglin Air Force Base in Florida arrived at AirVenture 2015 mid-day Wednesday and is making appearances throughout the convention.

The aircraft relies on stealth and advanced sensors to carryout its missions.

“If we have an airplane that’s very hard to find on radar, it’s a game changer,” said Col. Chris Niemi, one the pilots at the show. “If they don’t know you are there, they can’t shoot at you.”

Pilots and program backers said the F-35 represents the cutting-edge of aerial combat technology and is reshaping the way strategists think about air power. But the program has faced a prolonged development and been the subject of criticism for issues ranging from reliability of some parts and systems to procurement and projected operational costs.

The F-35, a fifth-generation fighter, is the latest wave of fighters that also includes the Air Force’s F-22 Raptor. Variants of the plane are expected to serve with the Air Force, Marines and Navy. A number of other countries, including the Netherlands, Denmark, Italy and the United Kingdom, have also signed on to operate the aircraft.

It’s not the first time Bob DuLaney has seen the transition from one generation of fighter to another. The retired U.S. Air Force major general witnessed the change from the F-4 Phantom to the F-16, a plane he said had its share of critics initially but has become ubiquitous over its service life.

“It’s a quantum leap in capability. … It’s almost like going from props to jets. It’s that big of a change,” said DuLaney, who now carries the title of F-35 Customer Engagement for Lockheed Martin. “We designed this airplane so software changes are going to be easy to keep this plane relevant for the next 50 years.”

But there’s a learning curve those working with the airplane will have to overcome.

“The hardest thing fighter pilots are going to find is getting rid of their fourth-generation thinking that they’re trying to put into a fifth-generation airplane,” DuLaney said. “You do what you know. … We took F-4 procedures and tactics and tried to cram it into an F-16.”

“The airplane is going to prove itself, I have no doubt,” he said. “It’s a complex program, and no one will deny that, but the airplane is really delivering.”

Eric Schnaible, the F-35 communications manager with Lockheed Martin, said the company has produced more than 140 of the aircraft for the U.S. military, and allies, at a cost of about $100 million per jet. That price is expected to drop to around $85 million as production increases.

Schnaible said Lockheed Martin is aware of the high cost of the plane and has implemented a plan, called “Blueprint for Affordability,” to help cut some costs out of the program.

“This is where we, Lockheed and Pratt & Whitney, are taking on some costs where there are smarter ways of doing business,” Schnaible said.

The F-35 is expected to be in service for the next 40 to 50 years, beginning in the next few weeks when the U.S. Marine Corps starts operational use of the aircraft.

Capt. Hope Cronin, chief of public affairs with the 33rd Fighter Wing at Eglin Air Force Base in Florida, said pilots and ground crews from around the world have been developing tactics and maintenance best practices for the past several years.

She said the U.S. Air Force is scheduled to being operational use of the jet at Hill AFB in in mid- to late-2016. Niemi, who has worked with the F-35 for about a year, is confident about the direction of the program.

“What I’ve found over the last year is we’re on track,” he said. “It’s taking longer than I would personally like… its costing more than I’d like … but I’m confident we’re on a path for success and I don’t think this airplane’s flight record to date is significantly different from other major weapon systems acquisitions we’ve had in the past.”

The aircraft is one of the key pieces of Lockheed Martin’s business portfolio extending out several decades into the sixth generation of fighter aircraft, Schnaible said.

What will that sixth-generation airplane hold in store?

“I don’t know. It’s where technology takes us. Our challenge is to stay ahead of it,” Schnaible said. “Fifth generation is going to be here a while.”

Niemi isn’t yet ready to give up on future aircraft with a pilot at the controls, though a team of manned and unmanned aircraft isn’t out of the question.

“The growth in unmanned aircraft is exponential … but we haven’t to date been able to create, or even envision, a system that is going to be as good as a pilot in a fighter plane in the environment where they can actually change the course of the battle,” he said.