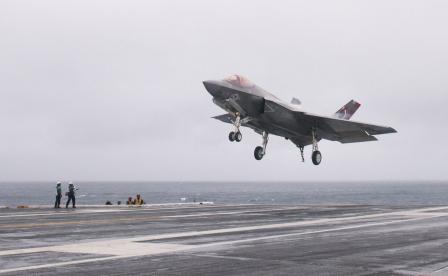 DT-II is the second of three at-sea test phases planned for the F-35C. Naval aircraft undergo DT-I, -II and -III test phases in order to ensure the development of aircraft that meet specifications and to identify mission critical issues sufficiently early in the test phase to deliver fully capable aircraft in time for their scheduled initial operating capability (IOC).

During DT-I in 2014, the F-35 Lightning II made aviation history when it conducted its inaugural arrested landings and catapult launches aboard an aircraft carrier. The first-ever carrier-based flight operations of the F-35C occurred Nov. 3 aboard USS Nimitz (CVN 68).  F-35C test pilots and engineers from the F-35 Lightning II Pax River Integrated Test Force (ITF) based at Naval Air Station Patuxent River in Patuxent River, Maryland, tested the suitability and integration of the aircraft with carrier air and deck operations in an at-sea environment Nov. 3-14. The F-35C demonstrated exceptional performance both in the air and on the flight deck, accelerating the team’s progress through the DT-I schedule, achieving 100 percent of the threshold test points three days early and conducting night ops during DT-I – an unheard of feat since the Navy’s F-4 era. Test pilots and engineers credited the F-35C’s Delta Flight Path (DFP) technology with significantly reducing pilot workload during the approach to the carrier, increasing safety margins during carrier approaches and reducing touchdown dispersion.

“The follow-on sea trials of the F-35C are possible through the cooperation and teamwork of the USS Eisenhower,” said Andrew Maack, Chief Test Engineer and Government Site Director of the Naval Variants ITF. “The men and women of the Eisenhower have partnered with the Pax River ITF test team in pursuit of a common goal – testing the F-35C in the at-sea environment. Together, their expertise and full measure of hard work and dedication will equip us with the data necessary to determine the path ahead for the F-35C.”

The F-35C will perform a variety of operational maneuvers during DT-II – including catapult takeoffs and arrested landings – while simulating maintenance operations and conducting general maintenance and fit tests for the aircraft and support equipment. Following the analysis of DT-II test data, the team will conduct a thorough assessment of the F-35C’s performance in the shipboard environment before advising the Navy on any adjustments necessary to ensure that the fifth-generation fighter is ready to meet its scheduled IOC in 2018.

“These sea trials will further expand the F-35C’s flight envelope,” said Lt. Gen. Chris Bogdan, F-36 Program Executive Officer. “Over the next few weeks we’ll learn more about what it takes to integrate next generation fighters aboard aircraft carriers.  The testing we’re doing today will prepare us for next year’s final at-sea developmental test and keep us on track to support the Navy’s 2018 initial operational capability date.”

The F-35C – the Navy’s and Marine Corps’ carrier-suitable variant (CV) – combines unprecedented at-sea stealth with fighter speed and agility, fused targeting, cutting-edge avionics, advanced jamming, network-enabled operations and advanced sustainment. With a broad wingspan, reinforced landing gear, ruggedized structures and durable coatings, the F-35C will stand up to harsh shipboard conditions while avionics equip the pilot with real-time, spherical access to battlespace information and commanders at sea, in the air and on the ground with an instantaneous, high-fidelity single picture view of ongoing operations.

By 2025, the Navy’s aircraft carrier-based air wings will consist of a mix of F-35C, F/A-18E/F Super Hornets, EA-18G Growlers electronic attack aircraft, E-2D Hawkeye battle management and control aircraft, MH-60R/S helicopters and Carrier Onboard Delivery logistics aircraft. The continued success of F-35 Lightning II shipboard operations aid the development of the Navy’s next generation fighter and reinforce Navy-industry partnership goals to deliver the operational aircraft to the fleet in 2018. Lockheed Martin is the aircraft contractor and Pratt & Whitney is the engine contractor.