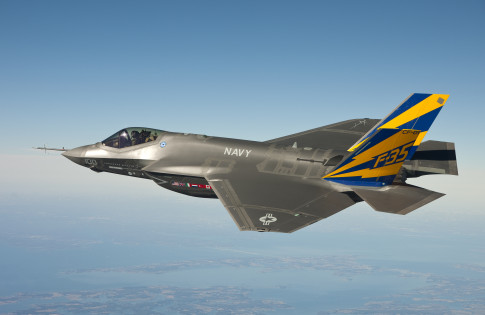 The Israel Air Force gives the F-35 a Hebrew moniker.

The F-35 Joint Strike Fighter is not only one of the most advanced fighter jets in the world — it now has a Hebrew name, and it’s literally awesome.

On Wednesday, the Israeli Air Force christened the plane Adir, which in modern Hebrew denotes awesomeness, radness and all-around cool (the dictionary definition is a bit more sober).

While Israel’s first F-35 squadron is slated to arrive in 2017, the army has started to prepare for it — readying structures and runways, and training technical crews and pilots — and thus needed to give it a Hebrew moniker.

The name was chosen from among more than 1,700 suggestions handed in by IAF soldiers and people from the defense industry. Naming the jet Adir reflects its capabilities and emphasizes the upgrade it will provide to the air force’s capabilities, the IAF said in a statement.

The name differs from that of most IAF fighter jets, which have traditionally been named after either birds of prey or weather phenomena. For instance, various models of the F16 have been given the names Hawk, Lightning and Storm.