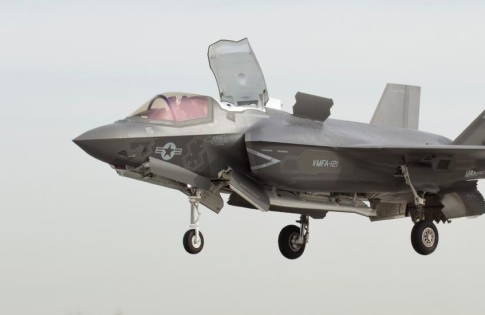 “I am pleased to announce that VMFA-121 has achieved Initial Operational Capability (IOC) in the F-35B, as defined by requirements outlined in the June 2014 Joint Report to Congressional Defense Committees,” said Gen. Joseph Dunford, Commandant of the Marine Corps. “VMFA-121 has ten aircraft in the Block 2B configuration with the requisite performance envelope and weapons clearances, to include the training, sustainment capabilities, and infrastructure to deploy to an austere site or a ship. It is capable of conducting Close Air Support, Offensive and Defensive Counter Air, Air Interdiction, Assault Support Escort and Armed Reconnaissance as part of a Marine Air Ground Task Force, or in support of the Joint Force.”

Dunford stated that he has his full confidence in the F-35B’s ability to support Marines in combat, predicated on years of concurrent developmental testing and operational flying.

“Prior to declaring IOC, we have conducted flight operations for seven weeks at sea aboard an L-Class carrier, participated in multiple large force exercises, and executed a recent operational evaluation which included multiple live ordnance sorties, said Dunford.” The F-35B’s ability to conduct operations from expeditionary airstrips or sea-based carriers provides our Nation with its first 5th generation strike fighter, which will transform the way we fight and win.”

As the future of Marine Corps tactical aviation, the F-35 will eventually replace three legacy platforms: the AV-8B Harrier, the F/A-18 Hornet, and the EA-6B Prowler.

“The success of VMFA-121 is a reflection of the hard work and effort by the Marines in the squadron, those involved in the program over many years, and the support we have received from across the Department of the Navy, the Joint Program Office, our industry partners, and the Under Secretary of Defense. Achieving IOC has truly been a team effort,” concluded Dunford.

The U.S. Marine Corps has trained and qualified more than 50 Marine F-35B pilots and certified about 500 maintenance personnel to assume autonomous, organic-level maintenance support for the F-35B.

The following can be attributed to Lt. Gen. Jon Davis, Deputy Commandant for Aviation:

“The performance of the VMFA-121 during the ORI in all evaluated maintenance, flight operations, and exams was exceptional.  The squadron’s aircraft performed well in all five IOC operational scenarios: Close Air Support, Air Interdiction, Armed Reconnaissance, Offensive Counter Air and Defensive Counter Air.  This included live ordnance deliveries.  The demonstrated capability of the squadron in the ORI, and in their run up to it, have given me the confidence that they meet our IOC criteria and, if required,  could respond to a contingency, giving our nation its first sea-based 5th generation strike fighter capability.  As such, the Commandant of the Marine Corps has decided to declare VMFA-121 initial operationally capable.

“The performance of VMFA-121, and the entire F-35B team, has reinforced my feeling that we not only have great Marines in this program, but that we are giving them the right aircraft.  As we field the F-35, we must remain vigilant in the forging of a sustainment system which supports readiness rates required to train for and conduct sustained combat operations.  If I have any concern at this point, it is that the spare parts available to extract maximum value from this exceptional warfighting asset will be shy of what we will truly need.  In our legacy fleet, we resource our sustainment accounts in order to achieve between 70 and 75% readiness.  I think we have that wrong, and I want to see if we can do better with this new platform.  The F-35B has so much potential.  Per the Commandant’s guidance, I’ve asked my staff to see why we can’t resource this jet to achieve a significantly higher readiness rate.”

Statements from government and industry leaders:

“On 31 May 2013, the U.S. Marine Corps sent a letter to Congress saying they would reach F-35B initial operating capability between July and December 2015. For more than two years, the F-35 Joint Program Office, along with industry, has been working hand-in-hand with the Marines to achieve that goal. The fact the Marines reached IOC at the beginning of their six-month window is a testament to the professionalism and dedication of the entire F-35 enterprise.

The U.S. Marine Corps decision to make the F-35B ready for combat is a significant event for the F-35 program. The weapons system is now in the warfighters’ hands and can be called upon to do its mission. The F-35 Joint Program Office, our industry partners, and the Marines have worked through a number of challenges as we focused on delivering a stealth fighter that could fly faster than the speed of sound, carry its weapons internally, conduct short take offs and vertical landings, and be deployed from amphibious ships and austere bases. It took an entire team effort to deliver the combat capability of the F-35B, and today we’ve done it.

Congratulations to the Marine Corps for leading the way. The F-35 government and industry team will continue to deliver on our commitments to field the world’s finest combat aircraft for the United States and our allies.”

The U.S. Marine Corps’ declaration of Initial Operational Capability marks a significant milestone in the continued evolution of the F-35 Joint Strike Fighter program. The decision was made following a thorough Operational Readiness Inspection which assessed the Marine Corps’ ability to employ this complex weapon system in an operational environment. This achievement is a testament to the efforts of the F-35 Joint Program Office and Industry team, as well as the hard work and support from the Marine Corps. This accomplishment is an affirmation that the F-35 program is on track to deliver essential 5th generation warfighting capabilities to our U.S. services and international partners. It is also a reminder that we still have work ahead to deliver the full warfighting capability required by all three services and our partners while we continue our successful efforts to drive cost out of the program.

“Today’s declaration of initial operating capability for the F-35B is an important milestone for the United States Marine Corps and the entire F-35 Joint Strike Fighter program.   The advanced warfighting capabilities of this aircraft make it a key component of our Navy and Marine Corps aviation strategy and the Nation’s security.  As the Department of the Navy and the F-35 Joint Program Office continue the rigorous process of validating and delivering this fifth generation strike fighter to the fleet, we must and will maintain our priority on performance and affordability.”

“Congratulations to the U.S. Marine Corps on achieving Initial Operating capability (IOC) with the F-35B Lightning II, a milestone achieved through dedication and perseverance – touchstones of the Marine Corps.  The multi-service F-35 Lightning II represents a quantum leap in air dominance capability. With the F-35B, the Marine Corps has a fighter that combines next-generation radar-evading stealth, supersonic speed, fighter agility and advanced logistical support with the most powerful and comprehensive integrated sensor package of any fighter aircraft in history to provide unprecedented lethality and survivability. A capability we know they will use to defend America and our allies for decades to come.

Fifty years from now, historians will look back on the success of the F-35 Program and point to Marine Corps IOC as the milestone that ushered in a new era in military aviation. Lockheed Martin, along with its industry partners, and together with the F-35 Joint Program Office, is proud to have played a supportive role for the Marine Corps achieving IOC. Whether supporting ship deployments, ALIS installation, or aircraft production and modifications, our team is proud to partner with the Marine Corps as we continue to provide the F-35 Joint Strike Fighter and its 5th Generation capabilities to the warfighter.

Again, to every Marine in the Corps, congratulations on this significant achievement and we look forward to supporting the Marine Air Ground Task Force as you execute your vital mission!

Pratt & Whitney and Rolls-Royce congratulate the U.S. Marine Corps on achieving initial operational capability (IOC) for the F-35B Lightning II.  Two years ago, the Corps set an ambitious objective to achieve IOC in July of 2015. That goal became a rallying point for the propulsion team and the entire F-35 enterprise. And now, thanks to the unyielding commitment and leadership of the Marines, that objective has been achieved.

As the first service to achieve this milestone with the F-35, the Marines now operate an aircraft with the most advanced combat capability in the world. The flexibility of the short takeoff and vertical lift F135 propulsion system allows the Marines to base operations from even the most austere of environments, enabling a revolutionary capability for the integrated Marine Air Ground Task Force to carry out their vital mission – anytime, anywhere.

The Pratt & Whitney and Rolls-Royce propulsion team are proud to have supported the Joint Program Office and Marines on their journey to this historic accomplishment. We’ve partnered with you from the initial design of the propulsion system, to several successful ship trials, and through hundreds of vertical landings in between, and we will stand beside the Corps as you continue to prove the indispensability of the F-35B to our nation and our allies’ security.