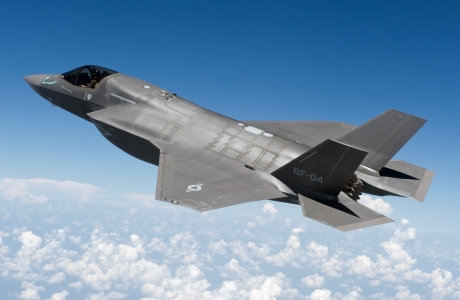 Papendrecht , January 14, 2015 — Fokker signed an agreement today, for the delivery of wing components (Flaperons & Outboard Leading Edge Flaps) on the next batches of Lockheed Martin’s F-35 Lightning II Joint Strike Fighter. Under this agreement, Fokker will be responsible for the manufacturing of the Flaperons & OLEF for the next batches of F-35 aircraft in low rate initial production lot 9-10. Spread over the period from 2015 to the end of 2017 this selection represents an additional value of tens of millions of US$ and secures employment for 100 highly qualified specialists at Fokker in Hoogeveen for the coming years.

The F-35’s Flaperons are 3 metre long flaps on the wing trailing edges and the OLEF are flaps on the wing leading edges, both vital for the controllability of the aircraft. The unique design is based on the low maintenance combination of composite and titanium with a better resistance to fatigue and corrosion. The design of the Flaperons & OLEF contributes to improved aircraft performance by saving weight and increasing strength at the same time. Fokker has been manufacturing the Flaperons & OLEF since Low Rate Initial Production Lot 3 for the F-35 aircraft. Fokker also produced more than 2000 sets of flaperons for the Lockheed Martin F-16 aircraft type for many years. Production of the F-16 components started in 1978 and is still going on today.

“Fokker is excited by this achievement; this shows we are moving forward in an expeditious way with the project,” said Hans Büthker, CEO of Fokker. “The selection for the follow-on production orders is a very important step. This order will secure employment for around 100 employees, a figure that will be doubled if the total production order is received”
Maxime Verhagen, the Netherlands’ Special Envoy for industrial participation added, ” We are proud of the progress of the Dutch industrial participation in the F-35 program. 28 Dutch companies are already directly involved in the F-35 program and probably over 100 more as subcontractor. This selection is an excellent achievement and shows the success of a focused approach.”

Minister of Economic Affairs Henk Kamp congratulated Fokker with the order en stated,” The production and sustainment of the F-35 provides opportunities for Dutch industries and employment in the high tech segment of our economy. With this selection by Lockheed Martin Fokker proves to have excellent abilities to substantially participate in this program.”

Fokker Technologies is the group name for four specialized Fokker Business Units: Fokker Aerostructures, Fokker Elmo, Fokker Landing Gear and Fokker Services. Fokker Technologies develops and produces advanced aerostructures and electrical systems for the aerospace and defense industry, and supplies integrated services and products to aircraft owners and operators. The group achieved a turnover of € 762 million in 2013 with 4,688 employees in eight countries.