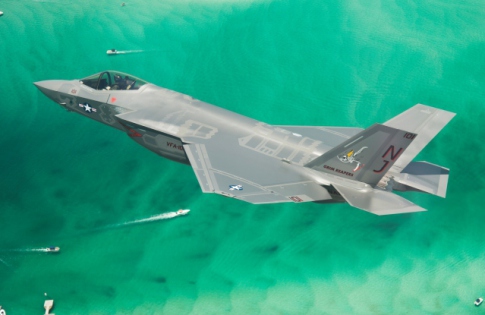 Nov 13 (Reuters) – The U.S. Navy version of Lockheed Martin Corp’s F-35 fighter jet made its first night flight off an aircraft carrier on Thursday as it neared the end of two weeks of sea-based testing aboard the USS Nimitz, Navy and Pentagon officials said.

Two F-35 C-model jets on board the carrier have already met 95 percent of the requirements for the first of three rounds of sea-based tests, proving to be more reliable and performing better than expected, Navy test pilots told reporters.

By midday Thursday, the jets had carried out over 101 catapult launches from the carrier, 214 planned “touch and go” landings, and 104 arrested landings using a redesigned tailhook, according to the F-35 program office.

Lockheed is developing and building three F-35 models for the U.S. military and U.S. allies, a $399 billion endeavor that is the most expensive weapons program in the world.

The Navy’s F-35C model has longer wings that fold up to save space and carries more fuel and weapons. Two more sea-based testing periods are planned for the F-35C in 2015 and 2016 before it can be declared ready for initial combat use in 2018.

The jet’s successful carrier testing about 100 miles (160 km) south of San Diego comes as the cash-strapped Navy decides how many jets to include in its fiscal 2016 budget request.

The C-model costs about $130 million now, but Lockheed and other key contractors are trying to lower the price to about $96 million by 2018, including inflation, by cutting overhead and other measures. Jim Gigliotti, director of F-35C and Navy programs for Lockheed, told Reuters the biggest driver would be a decision by the Navy to buy more than two jets per year.

Commander Tony Wilson, one of four test pilots carrying out the flights and maneuvers, said there had been only one “bolter” so far, a term for a jet that fails to catch the heavy duty cables used for arrested landings, forcing it to circle around again.

“We’re conducting the Super Bowl of flight test,” he said, adding that no major issues had emerged during 11 test days. “Everything that we’re learning is extremely minor.”

Navy officials said the testing was ahead of schedule and could wrap up before the planned finish date of Monday.