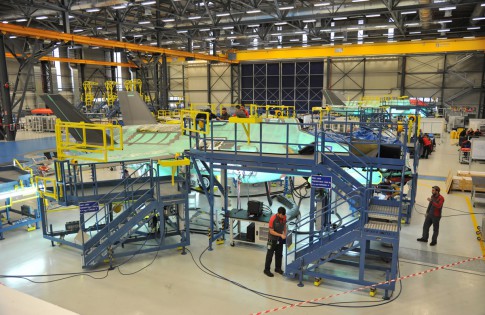 In an enormous rectangular building in Cameri, Italy, a group of people swarms over the grey object that among them is known as AL-5. To others, it is known as the fifth Lockheed Martin F-35A Lightning II for the Italian Air Force. But judging by the language used, it’s not Italians who seem to turn AL-5 inside out. They are Americans, employed by Lockheed Martin and the US Department of Defense (DoD). And their job at hand is quality inspection of a factory fresh, Italian-made F-35 Lightning II.

Airheadsfly.com’s recently paid a very exclusive visit to the rather secretive F-35’s Final Assembly and Check Out (FACO) facility in Cameri, which is run by Leonardo Aircraft and which rolled out its first F-35 in March 2015. The FACO is the result of extensive negotiations involving Italy, the US, Lockheed Martin and Leonardo Aircraft prior to 2010.

Development of the site started as soon as the ink was put on the contract. When epxloring the facility, it is hard to image that this 22-building, one million square feet complex was raised from the ground up in just three years. It is one of only three F-35 final assembly lines in the world, the others being Lockheed Martin’s production plant in Forth Worth, Texas, and Mitsubishi’s FACO in Nagoya, Japan.