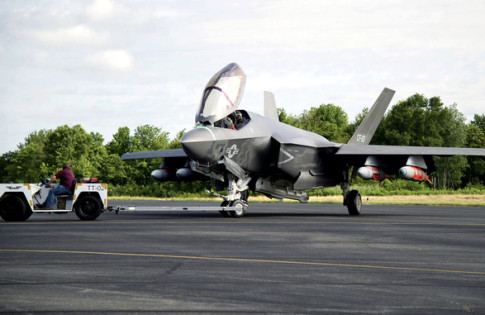 Loren Thompson is chief operating officer of the Lexington Institute, which receives money from companies engaged in both the F-35 and F/A-18 programs.

Over the last several years, the tri-service F-35 fighter program has gradually retired risks and reduced costs, in the process acquiring broader political support. More than 50% of the program’s flight-testing schedule has been completed, and no major problems have been identified. The fighter’s F135 engine has seen similar progress. With 11 allies committed to buying the airplane, the program looks unstoppable.

Although the Pentagon has been deliberately vague about how the stealth, sensor fusion and other features of the F-35 make its performance far superior to that of last-generation fighters, it is rapidly emerging as the gold standard of tactical aviation in global markets. But what will matter in the political debate at home is the airplane’s price tag, because that is the one feature of F-35 that politicians and pundits think they understand. Chances are, though, they do not.

The apparent cost of a military aircraft varies wildly depending on where it is in its production run, what items are included and whether inflation is discounted. If you want to estimate costs, heroic assumptions (also known as guesses) are required to establish values for production rates, learning curves and other parameters essential in calculating cost.

For instance, prime contractor Lockheed Martin estimates that if the program of record for the Air Force variant of F-35 is executed as planned, an airplane ordered in 2018 and delivered in 2020 will cost $85 million in “then-year” dollars ($78 million in today’s dollars). That is in the same ballpark as the latest F-16—the legacy fighter that F-35 will replace in Air Force combat units. But you have to make a lot of assumptions to get to that number.

Whether those assumptions prove valid probably will not matter for the Air Force and Marine variants, because the Air Force version is well on its way to being the global standard for tactical airpower, and the Marines view the vertical-takeoff-and-landing version of the F-35 as their top modernization priority.

The service that sometimes sounds ambivalent is the Navy. Although its budget will fund development of the carrier-based F-35C through the end of the decade, its leaders say things and do things that make outsiders wonder. Studies have been commissioned to assess whether the Navy could make do with fewer F-35s, and senior leaders have raised doubts about the longevity of low-observables.

So naval aviation has become the main arena in which F-35 costs are still being debated. Boeing, the prime contractor for the F/A-18E/F Super Hornet and its electronic-warfare cousin, contends that the Navy could save billions by purchasing more of those aircraft rather than moving to the F-35C

At first, the math seems to add up: Even if we include the electronic defenses and targeting systems not usually subsumed in a Super Hornet price tag, the unit recurring flyaway cost of a single-seat F/A‑18 is about $80 million in today’s dollars. The corresponding cost for an F-35C is $130 million.

The problem with this comparison is that the Super Hornet first flew in 1995 and the F-35C in 2010. The cost of each airplane reflects the fact that they are at very different stages in their life cycles. Only 22 carrier-based versions of the F-35 have been produced compared with hundreds of Super Hornets. But when a similar number of Super Hornets had been produced, their unit recurring flyaway cost in today’s dollars was about what it is today for the F-35C.

This should not come as a surprise because fighters tend to follow the same learning curve over the course of their production. When 100 single-seat Super Hornets had been produced, the unit recurring flyaway cost—with all necessary electronics included—was about $110 million in today’s dollars, which is where F-35C is likely to stand at the 100th airplane. And when F-35C gets to 300 airplanes, its unit recurring flyaway cost will be about $90 million—right where the F/A-18E (the single-seat version) was in today’s dollars.

These numbers can be verified easily by perusing the Pentagon’s Selective Acquisition Reports. What they reveal is that the F/A-18E and F-35C have nearly identical unit production costs at the same stages in their evolutions. Where the airplanes differ markedly is in their operational performance—items like survivability, situational awareness and strike capability. Such differences explain why the Navy needs a new fighter in the first place.