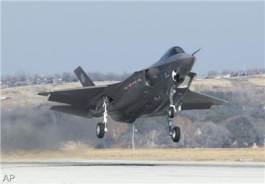 Industry sources said the UAE leadership has been quietly discussing the prospect of acquiring the F-35 fighter-jet from the United States. They said JSF was raised by UAE officials and military officers in several forums over the last year.

“The UAE wants to be part of JSF, and eventually share in technology and co-production”, a source said. The sources said UAE Air Force officers were briefed on the F-35 program

during IDEX-2013, which took place in Abu Dhabi in February. They said the UAE proposed becoming a regional hub for maintenance and marketing of JSF to Gulf Cooperation Council states.

“The UAE feels it’s ready for a fifth-generation fighter, which could serve as the basis for its new aerospace sector,” the source said. “The other planes available are considered poor alternatives.”

So far, the United States has not rejected the prospect of a UAE procurement of the F-35. But the sources said that in recent discussions U.S. officials and military officers stressed that existing orders could keep Abu Dhabi from acquiring JSF until at least 2020. Over the last five years, JSF has encountered repeated delays in testing and production. So far, Israel has been the only country outside of the United States to order the F-35, the price of which has not been set.