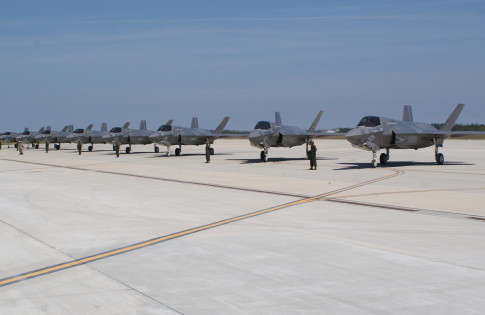 (Bloomberg) — A fleet of  Lockheed Martin Corp.’s F-35 fighters will cost $857 billion over 55 years to operate and support, 22 percent less than previously estimated, according to the head of the Pentagon office developing the plane.

“The previous cost estimate did not factor in this new knowledge,” Bogdan said.

The F-35 is the Pentagon’s costliest weapon system, with an estimated price tag of $391.2 billion for a fleet of 2,443 aircraft, up 68 percent from the projection in 2001, as measured in current dollars.

The rising costs and troubles in building the plane even as it’s being developed have led to criticism in Congress. This year, lawmakers, the Government Accountability Office and the Pentagon test office have said the aircraft is making progress in flight tests and in stabilizing production.

The reduced estimate for operating the planes was among such indications cited by Bogdan in his letter to the lawmakers.

“Significant effort remains to continue to find cost efficiencies and reduce this number even further” and “I expect these cost estimates to continue to go down over the next several years as the program matures,” Bogdan said.

Jennifer Elzea, a spokeswoman for the cost-assessment office that compiled the earlier $1.1 trillion estimate, said in an e-mail that she couldn’t comment on Bogdan’s reduced projection.

The Pentagon moved to shelter the F-35 from the initial impact this year of the budget cuts known as sequestration, locking in several contracts before the reductions took effect. Frank Kendall, the Defense Department’s chief weapons buyer, has said he would do his best to protect the plane built by Bethesda, Maryland-based Lockheed from the effects of $52 billion of sequestration cuts set for fiscal 2014.

Under further cuts, Bogdan said in his answers to lawmakers, “there is a significant risk of not being able to deliver” the fully capable version of software the aircraft needs to meet its warfighting potential.

Sequestration also would mean “a reduction in the number of aircraft” that can be purchased, he said. The Pentagon wants to buy 29 next year.

Bogdan estimated that basic production costs, including engines, for the three variations of the aircraft will fall as much as $35 million per plane by fiscal 2018, when full-rate production is scheduled to begin.

If current trends hold and production rates increase, Bogdan said, the Marine Corps version will fall to $110 million a plane from $153 million under the fifth production contract signed in December.

Bogdan also acknowledged what the Pentagon rarely says publicly — that the F-35 is being developed partly in response to China’s military modernization and its emphasis on weapons and tactics intended to keep U.S. vessels and aircraft away from its territorial waters should war with Taiwan break out. This is known in Pentagon jargon as an “anti-access/area denial” strategy.

Asked by lawmakers what threat is driving procurement of the F-35, Bogdan cited “emerging threats” that “are presently being fielded in China and other nations.”