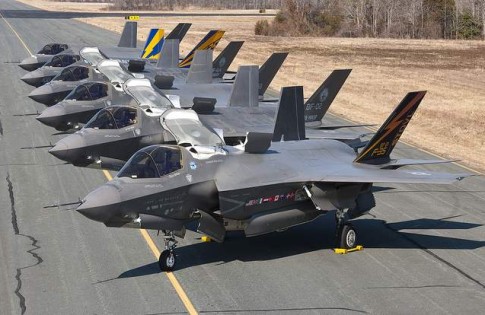 Frank Kendall, undersecretary of defense for acquisition, technology and logistics, made his comments Wednesday after speaking at the ComDef conference in Washington, sponsored by IDEEA.

“We’re … looking at that number,” Kendall said. “The official number is still the one we put up in the SAR [selected acquisition report]. We’re going to do a review of F-35 this fall. We’ll get another estimate out of CAPE [Cost Assessment and Program Evaluation] for that and we’ll probably make some adjustments.”

In late August, Bloomberg News reported that Lt. Gen. Christopher Bogdan, the head of the F-35 program, estimated that O&S costs have dropped to $857 billion. Previous government estimates have put the lifetime O&S costs at $1.1 trillion, a number proponents of the fifth-generation fighter have said suffers from unfair projections of inflation over a 50-year period.

When asked about that report, Kendall indicated that estimate may be overly optimistic.

“I do expect it to come down. I don’t know if it will come down as much as [Bogdan’s] number, but we’ll take a look at it,” Kendall said. “He has a basis for it. The problem with that number is there are so many different assumptions you can make and too many different ways to calculate it. I don’t want to be overly optimistic and I don’t want to be overly conservative.”

“So, we’ll take a look at the assumptions he made and we’ll look at what CAPE comes up with and see what we want to use as an official estimate.”

If sustainment costs drop, it would continue a four-month stretch of positive news for the F-35 program, which started the year off with two separate incidents requiring the grounding of jets.

In May, the Pentagon announced in the SAR that the total price tag for the F-35 program fell $4.5 billion in 2012, the first time in the F-35’s checkered history that estimators have lowered the projected cost of the program. That was followed by a July agreement to purchase low-rate initial production blocks six and seven with contractor Lockheed Martin and an agreement in August to purchase engines for block six from Pratt & Whitney.

The Lockheed and Pratt deals each saw cost-per-unit figures drop, a trend both companies expect to continue.