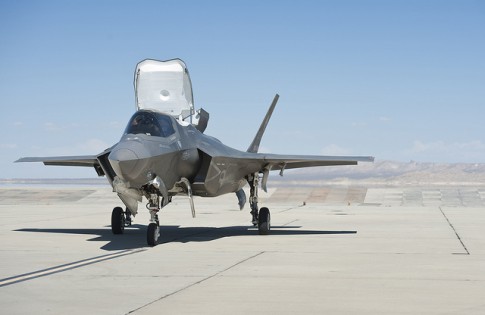 Australia is committing to buying 100 F-35 Joint Strike Fighters, the Pentagon’s most expensive weapons system, as the nation released its long-term defense strategy that seeks to balance competing interests of the U.S. and China in the Asia-Pacific.

The decision is a boost for prime contractor Lockheed Martin Corp. after the plane has been plagued by a costly redesign, bulkhead cracks, too much weight and software delays. Australia, an ally of the U.S., also decided in its Defense White Paper released today to bring forward funding for 12 new Boeing Co. (BA) EA-18G Growler aircraft and will replace its existing Collins Class submarines with a fleet of 12 conventional submarines, to be assembled in South Australia.

Prime Minister Julia Gillard, facing elections in September that polls show she will lose, has faced criticism from the opposition over plans announced a year ago to cut defense spending by A$5.4 billion ($5.54 billion) over four years. Australia is allowing as many as 2,500 American Marines to be based in the northern city of Darwin as part of President Barack Obama’s “pivot” to the Asia Pacific to counter an increasingly assertive China, the biggest spender on defense after the U.S.

“More than any other, the relationship between the U.S. and China will determine the outlook for our region,” the paper said. “Some competition is inevitable, but both seek stability and prosperity, not conflict. The government does not approach China as an adversary.”

The estimated cost for a U.S. fleet of 2,443 F-35 aircraft has risen to $395.7 billion, up 70 percent from $233 billion in 2001, as measured in constant dollars, according to the U.S. Defense Department. The escalating cost of the program has caused debate in countries that plan to buy the fighter, with the U.S. and Lockheed Martin (LMT) counting on robust international sales to keep the price per plane from rising still higher.

More than 700 F-35s would be purchased by other countries, including Australia, Norway, the U.K., Turkey, Italy and the Netherlands. Italy, Canada and Denmark have scaled back their planned purchases.

“While the U.S. remains committed to the Joint Strike Fighter, procurement has been slowed to complete more testing and make developmental changes before the purchase of aircraft in significant quantities,” the paper said today. “The government remains committed to acquiring the fifth-generation JSF aircraft.”

The paper also outlined Australia’s focus on boosting its northern defenses with help from the U.S., with the nations exploring ways to boost access to a global satellite communications network through a facility in Western Australia.

The U.S. Air Force is expected to increase rotations through northern Australia, while the nation’s navy will co- operate with Australia’s military in the Indian Ocean, it said.

Australia has decided not to build a second major fleet base on its eastern coast or buy a new major coastal defense force training area, which together would have cost as much as A$9 billion, it said. Investigations into potential “off-the- shelf” submarine purchases have been halted.

The government, trailing Tony Abbott’s Liberal-National coalition in opinion polls, aims to increase defense funding toward a long-term target of 2 percent of gross domestic product from an average of 1.8 percent since 2000. The May 14 budget will have a “modest” increase in defense spending on the forward estimates compared to last year, Defense Minister Stephen Smith told reporters in Canberra today.

Australia is concerned about an increase in threats to cyber security, it said. U.S. security firm Mandiant Corp. in February released a report saying China’s army may be behind a computer-hacking group that has attacked at least 141 companies worldwide since 2006.

“The potential impact of malicious cyber activity has grown with Defense’s increasing reliance on networked operations,” the paper said. “Compromise of Australian government information could allow an adversary to gain economic, diplomatic or political advantage over us.”

China will boost defense spending 10.7 percent this year as the government modernizes its military arsenal and adopts a more assertive stance in territorial disputes with its neighbors.

China’s military spending is set to rise this year to 740.6 billion yuan ($120 billion) from 669.1 billion yuan, the Ministry of Finance said in a March report. China has the second-biggest military budget in the world after the U.S., which spent nearly six times more on defense than China last year and is now cutting those outlays.

“China’s defense capabilities are growing and its military is modernizing, as a natural and legitimate outcome of its economic growth,” the paper said. “This will inevitably affect the strategic calculations and posture of regional countries and is changing the balance of military power in the western Pacific.”

That stance contrasts with commentary in the previous White Paper in 2009 which said “the pace, scope and structure of China’s military modernization have the potential to give its neighbors cause for concern.”